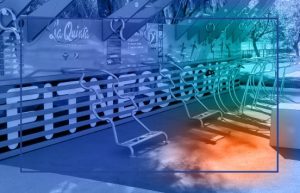 National Fitness Campaign (NFC) is a social enterprise dedicated to building healthy communities around the world by building world-class fitness courts in public spaces. Their goal is to provide free fitness spaces in hope of breaking down barriers to fit lifestyles and to change health outcomes.

The NFC campaign for healthy lifestyles began in 1979 when Founder Mitch Menaged invented the original Fitness Court in San Francisco with the support of Wells Fargo Bank. The first courts were initially launched at Stanford University and in San Francisco. Between 1980 and 1990, National Fitness Campaign expanded to over 4,000 communities around the world. Partnerships with more than 100 corporate sponsors helped raise over $100 million in the United States, Canada and Australia.

Obesity is a common, serious and costly issue throughout the world. By 2012 the obesity rate had reached an alarming 40% of American adults. According to the Centers for Disease Control and Prevention (CDC), the prevalence of obesity affected about 93.3 million US adults in 2015 and 2016. Obesity-related conditions include heart disease, stroke, type 2 diabetes and certain types of cancer that are some of the leading causes of preventable, premature death.

In response to the increasing obesity rates, Mitch Menage returned and assembled a world-class team to reinvent NFC Fitness Courts for the 21st century. The NFC team includes Mark Lauren, Sam Lucente, Phil Ginsburg and Gadi Amit. The Fitness Court is a powerful way to encourage healthy activity and promote community wellness. With each national campaign, NFC gives back a share of their profits to selected partners in under-served communities. They believe that every individual deserves access to best-in-class facilities to improve their personal well-being.
The American-made Fitness Court is an adaptable outdoor bodyweight circuit training system, crafted as civic art and designed for adults of all ages and ability levels. It is the world’s best outdoor gym, featuring high intensity seven movement circuit-training routines, challenges and classes. The new fitness court is also part of a digital community ecosystem. The Fitness Court App is designed to be a coach in your pocket, with programming and challenges that are digitally delivered through the latest technology platforms for both Apple and Android. Not only does the app act as a coach with programming and challenges, but also allows you to track results. The addition of technology turns neighborhoods, cities, and entire states into virtual and ever-expanding outdoor gyms.

La Quinta has partnered with National Fitness Campaign by demonstrating that health and wellness is a priority for residents, business and tourists. The city has been selected to join hundreds of cities in bringing The Fitness Court to local parks and trails in 2018. The Fitness Course allows users to follow circuit-training system that includes seven movements: core, squat, push, lunge, pull, agility and bend. Each station also has four progressive training options: easy, medium, hard and expert. There is no cost to use the facility and the app is free in the AppStore and Google Play.

The Fitness Court opening in La Quinta is being funded partially through a grant received from NFC and partially through the city’s parks equipment replacement fund. The city’s Facilities department will be maintaining this outdoor recreation site at La Quinta Park (across from La Quinta High School, corner of Blackhawk Way and Adams Street). Everyone is welcome to attend the La Quinta Fitness Court Launch Party on Saturday, October 20 at 9:00 – 10:30 am. Attendees will hear from City Leaders and NFC Founder Mitch Menage, enjoy guided orientation through the circuits and familiarization with the app, and have an opportunity to participate or watch the Mayor’s Fitness Court Challenge. Once the new fitness court is open, the City will reach out to fitness groups and contract instructors to schedule additional programming at this site. La Quinta is dedicated to free health & wellness options for all residents and visitors.


Riverside County Library System's Mobile Resource Van is Back! You can find them at Pioneer Park on Tuesdays and La Quinta Park on Thursdays. Come out, say hi, and see how they can be a resource for you! #LoveLQ